Abstracts of the 41th Symposium on Cuniculture, ASESCU Hondarribia, Spain, 12th-13th May, 2016

The 41st Congress of the Spanish Association of Cuniculture (ASESCU) was held in Hondarribia (Guipúzcoa province) from 12th to 13th May 2016. This edition coincided with the 40th anniversary of ASESCU, which was founded in 1976. The main papers focussed on analysing the changes in rabbit feeding in the last decades and future prospects, on preparing the future reproductive rabbit, on Spanish consumer segmentation and characterization of rabbit meat consumption, and on the role of the Rabbit Meat Marketing Board (INTERCUN) in promoting consumption of rabbit meat in Spain. A specific session was devoted to explain the objectives and progress of the research projects supported by the partnership between the Spanish Institute of Agricultural Research (INIA) and INTERCUN. In addition, a round table was held on the present and future prospects of the rabbit farming in Spain. Moreover, a total of 24 communications were presented both in working sessions with oral communications and posters (nutrition, carcass and meat quality, pathology, ethology and welfare, and management and genetics). The meeting was attended by more than 185 participants, including researchers from Spain, Portugal, Italy, France, Brazil, Egypt, and Puerto Rico among other countries. Abstracts of the contributions presented are reported below. 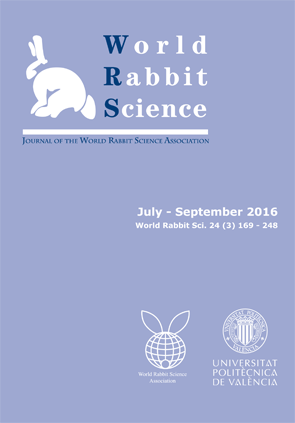