The 5th American Rabbit Congress was held in Toluca, Mexico State, Mexico from September 8th to the 11th, 2014. Research works representing 14 countries were accepted to take part at the congress, including papers from Algeria, Argentina, Brazil, China, Costa Rica, Cuba, Egypt, France, Hungary, Italy, México, Uruguay, the USA and Venezuela. These research works highlight the enormous interest, effort and commitment of the scientific community that bonds the trinomium of Research+Innovation+Technology Transfer, in favour of the integral development of rabbit rearing as an important primary activity that generates permanent employment, as well as healthy and nutritive meals for their respective countries for the XXI Century World. One major impact at this 5th American Rabbit Congress was the participation of Argentina, Brazil and China. The latter country’s report was presented by Laping Wu and Dong Wang (2014), showing that from 2005 to 2010, meat production of swine, beef and poultry underwent average growth of 2.6%, whereas rabbit meat production reported an annual average growth of 6.29%, reaching an annual volume of 761 000 tons, positioning China as the world’s main rabbit meat producer. This data highlights the great potential of rabbit production, both as an economic activity and a key strategy in the fight against hunger and poverty in many countries all over the world. During the congress, scientific works were presented related with the fields of Ethology, Housing & Welfare; Genetics; Reproduction; Digestive Physiology and Basic Nutrition; Feed Evaluation and Feeding; Pathology & Hygiene, Meat Quality, Safety & Dining; Management, Social & Economy. Furthermore, the meeting of the AB-WRSA chaired by the AB-WRSA founder, Dr. Steven Lukefahr, also took place at this congress, in which the new board of the American Branch was elected and the proposal put forward for the next American Rabbit Congress to be held in Costa Rica. Finally, at the post-congress, a course-workshop on rabbit meal rationing was given by Dr. Luiz Carlos Machado, and 6 conferences were held on the new opportunities for rabbit feeding and meal production. 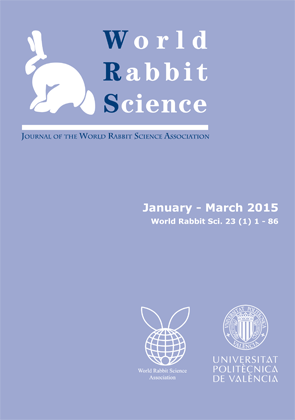