The 39th Congress of the Spanish Association of Cuniculture (ASESCU) was held in Tudela from 29th to 30th of May 2014. The main papers were related to analysing the current situation of rabbit sector in Navarra region, problems related to marketing and opening new markets for rabbit meat, production costs in rabbit farming, producer organisations, growth performance in crossbred rabbits as well as the partnership between the Spanish Institute of Agricultural Research (INIA) and the rabbit marketing board (INTERCUN) to support research projects. In addition, 2 round tables were held on the role of producer associations in the development of rabbit farming and the risks of medication dependency. Moreover, a total of 25 communications were presented both in working sessions with oral communications and posters (pathology, technical-economical management, nutrition, reproduction, management and welfare, and consumers’ behaviour). The meeting was attended by more than 190 participants, including researchers from Spain, Portugal, France, Ecuador, Brasil and Egypt. The abstracts of the contributions presented are reported below. 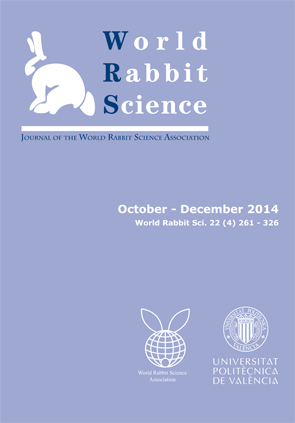